Among the women artists represented in the collection of the Imperial Museum in London is Evelyn Mary Dunbar who was one of the few women to become an official war artist in Britain in the Second World War. Details of her early life are sparse and it is difficult to ascertain how she came to be appointed. It is known that she was born in Rochester in 1906 and studied at both Rochester and Chelsea Schools of Art before enrolling at the Royal College of Art in 1929. She remained there for four years, financed by a scholarship from Kent County Council. During her final year she undertook several large murals at Brockley School, London. This interest in large-scale public works persisted and she later became a member of the Society of Mural Painters. Commissions of this kind were not common in Britain and, possibly for financial reasons, she collaborated in the late 1930s with Charles Mahoney in writing and illustrating a book on gardening. A newsletter of the Artists’ International Association states that, by the outbreak of war, one of Dunbar’s paintings had been purchased by the National Gallery. This almost certainly refers to the exhibitions of works by contemporary artists which were held in the National Gallery at that time and it is likely that through this, Dunbar’s work became known to Kenneth Clark, then Director of the National Gallery, who was influential in the appointment of a number of Official War Artists.

Dunbar received her commission in April 1940 and departed immediately for the Farm Institute of Sparsholt, Winchester (later Hampshire College of Agriculture) which had been converted entirely to the training of female recruits for the Land Army. These women were given short but intensive courses in various aspects of farming. Dunbar lived at the Institute with the other staff and took her subjects from the life of the students. The most striking aspect of their attire were stiff yellow oilskin aprons which Dunbar took great pleasure in depicting. Her paintings for the War Artists’ Advisory Committee always showed women engaged in the task in hand, whether it was in the dairy, potato picking or pruning trees. One of the students described how Dunbar would be out in all weathers to obtain her sketches but in the evenings would entertain them by drawing their portraits on the blackboard. 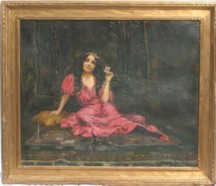 At the Farm Institute, Dunbar met an economics lecturer, Roger Folley, whom she married in 1942. During the war he served in the Royal Air Force and Dunbar travelled to a number of regions including South Wales and Northern England in order to gain further material on the activities of the Women’s Land Army. Although as a female war artist her commissions were typically restricted to women’s occupations, she made no attempt to hide the roughness of the work, the monotony and tiring nature of tasks such as sprout picking. In A 1944 Pastoral: Land Girls pruning at East Malling she adopted a more imaginative approach by painting a border in which women’s hands holding secateurs and saws display the various skills required by the task. In the central area, the activity of pruning is dominated by the geometrical structure of two ladders. In addition to the Women’s Land Army she depicted the Women’s Auxiliary Air Force, and nurses. Unlike some of her counterparts, she did not object to being limited to women’s activities. Her chief difficulty with the War Artists’ Advisory Committee appears to have been her inability to work to a time-scale and her frequent requests for money.

After the war she settled in Ashford, Kent while her husband resumed his lecturing career at the nearby Wye Agricultural College and supervised the farm which they bought. Dunbar was elected a member of the New English Art Club in 1945 but only exhibited with them until 1948. From 1950 she was a visiting lecturer at the Ruskin School in Oxford (8) and later assumed the job of organising exhibitions at Wye College. She painted a wide range of subjects: nudes, flowers, portraits, landscapes and carefully observed scenes of everyday life of which The Fish Queue (1944) is one of the most important. In contrast she also carried out a small number of paintings of fantastic subjects taken from her imagination. She died suddenly in 1960 while out walking with her husband.