Until the end of the 1950s (I became pregnant with my daughter in 1959) I worked in the field of visual arts, in an artistic world defined by men. As Claudie Hermann wrote in ‘Les voleuses de langue’ (1976): ‘In this male world abstraction is dominated by two factors: system and hierarchy’. All painting should be classifiable in one of the genres: impressionism, expressionism, cubism, conceptual art, support-surface etc., and should be constructed according to the aesthetic laws of each category.

I had studied Fine Arts, I worked through figurative art, impressionism and arrived at abstract expressionism. I was married to a painter, and I tried to develop alongside him.

It was an era when art galleries depended on young artists and employed them under contract for several years. I myself tried to get out of such a contract and it was in this way that I found myself alienated, violently so. ‘It is too risky to back a woman, you are bound to have children and stop painting (producing)’.

Thanks to these restrictions I was able to become the painter that I am today. Being thus rejected by the galleries I was exiled from the established male hierarchy. I was therefore able to discover surrealism, and I became aware of my female identity. The bizarre, the baroque, the wonderful, the absurd, the horrible, the unrecognisable, the disordered are not elements that have been added on; they are the essential ingredients of surrealism. Surrealist objects are reminders of the invigorating concept of ‘permanent invasion’ which refuses to leave painting, or poetry: it conspires to confront the wind in the street and the apparent impassibility of nature. ‘Le hasard objectif’ (unbiased accident) is the sum of all these phenomena which manifest the invasion of the supernatural into everyday life. 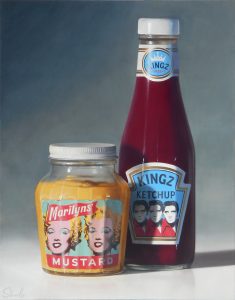 In my own work, aesthetic concerns were gradually supplanted by an organic automatism. The interpretation of the outside world succumbed to my own inner world. I started to paint in an automatic way, and this manifested itself on paper like images in a dream. I was able to give my unconscious some form, some shape and then I stepped back and interpreted what I had done.

Contrary to Jewish faith and tradition, which is where I had my roots, I felt that women were privileged more than men: the lunar cycle of menstruation, the capacity to create life in one’s own body, and the menopause. I therefore decided to be a ‘whole’ woman and to nurture my creativity in art. I conceived a child, willingly, to see what the experience would do for my art.

The 270 days of pregnancy, plus the 15 days that I breastfed my daughter (I unfortunately had to stop because of a life-threatening infection) were a period during which I was consciously and literally floating. What I was feeling at the time paved the way for the creative work that I am able to produce today. My pregnancy influenced the direction that I was to take in life and in my art. From then on the surface that I work on and the space I work in is for me a womb, where the elements of art are transformed, amalgamated and ally themselves together to create a new being–which is a work of art. My relationship with the materials I use becomes physical, carnal even: to paint, to draw is like making love with different people. My imagery has become female.

I listened to my unconscious and was surprised at what it revealed. On one occasion I painted the double portrait of myself and the man with whom I was living at that time. In this picture we are separated by a chessboard and our friends asked me the reason for this. Later on, I understood that my unconscious had known, at the moment when our union was at its strongest, the moment when I painted this canvas, that we were to separate. In this way I started to paint around a central blank space from 1963. I only understood the significance 16 years later.

My female imagery spilt over from paper onto fabrics printed with everyday objects: firstly those which represented the subjects to do with women, ironing board, iron sleeve board, kettle. Isolated as much from the existing patriarchal system as from feminists who wanted to replace men and their power by the very same male methods, I always felt that without men I am only a part of creation, and that equal participation of both men and women is necessary for there to be life.

I found support and confirmation for my feelings in the Cabbala, in Tantrism and especially in Taoism. The doctrine of Yin and Yang of Taoism dates probably from the first milleniun BC. It stipulates that everything, every event or situation in life is an interaction of these two forces. For the Taoist, death is not a separation of the body and soul like we believe in the West: it is rather a separation at the interior of the individual between the Yin and the Yang. According to tradition when a major chaos strikes the Yin and Yang forces, Yang, being light rises up into the higher spheres to form the sky and Yin, being heavier, sinks down and forms the earth. One finds the same process in the compositon of the human being: the head being the sky and the feet the earth. The uppermost parts of the body contain the Yang spirits of the male sky, and the lowermost parts the Yin, female spirits of the earth.

One will only be able to realise the contribution of female imagery to art the day when one can accept that art can also be created by men, who have a predominant Yin force like we accept the opposite, that there are women who produce art with a predominant Yang influence. The characteristics of the work should not depend on biological sex but on the dominance of the Yin or Yang on the artist in question.

In painting and drawing on objects I want to subjugate this fact, this reality which I find alienates me. I would like to breathe life into inanimate objects. First, I introduce all my female imagery into the work, then make the distinctions disappear as I do to the symmetry also, and then I distort them into a clear and a dark side of Yin and Yang. And then I challenge the God who has created man in his own image and I transform the human being into an object and out of this I produce performances. In the performances I paint the body, from head to foot, of both men and women, making them neuter. These living neutered objects will get mixed up in my painted objects; I breathe life into them and the objects then become human beings. I go even further: I paint myself, I confuse myself with my work and I become my work.

As women, we have three lives: the first one until puberty, the second is the age of fertility, and the third is the menopause. I am in my third life. This life is a gift which has been given to us in this century because science has prolonged our ability and our hope to live longer. These extra years gave birth to new myths of which one is youth. Before they were passages from one stage of life to another more advanced stage and they were marked by lines, incisions on the body and the face, but today plastic surgery can make one relive one’s life. I feel more serene, wiser, better balanced and younger at 50 than I felt at 40, when I was very frightened by this third life, which I saw only in terms of old age. I realise today that it is the great age. My art being the same as the breath of my life, I am able to contemplate a face-lift to obliterate the wrinkles which betray age, and making a film: I will only have the face-lift if I can make the film–for my art, a ritual of Youth!

In signing a covenant with science, I may be given, if my Yin and Yang remain united, a fourth life.